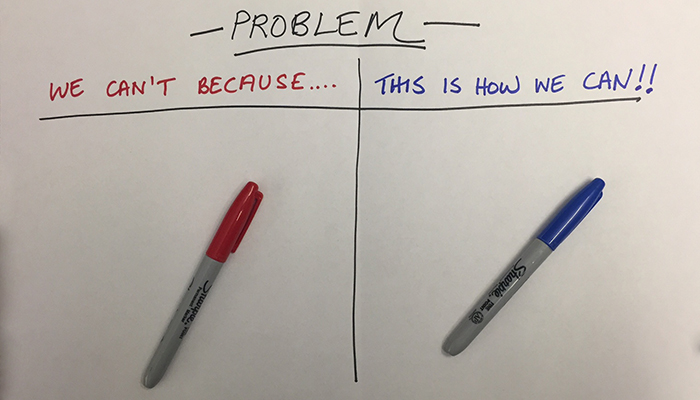 I’ve been thinking a lot about creativity lately, and about why so many of the people that I meet and work with tell me that they aren’t very ‘creative’: that they seem to have trouble coming up with new ideas to solve problems either in their personal lives or at work.

Take, for example, a discussion I had a couple of weeks ago with Joe, a friend of mine who’s just started his first small business, a personal transportation company somewhere between a tradition taxi dispatch service and Uber. “Some things aren’t working quite the way we expected they would,” he said worriedly. The drivers that we thought would jump at the chance to work with us aren’t as interested as we thought they’d be.” When I asked why that might be, Joe paused and then answered, “The biggest problem is that right now they’re being paid same or next day for their rides. That’s what taxi drivers are used to. But the system we’ve set up has them getting payments once a week.” “If that’s the problem,” I asked, “Then why not just pay them next day in the way that they’re used to? I’m sure if you really thought about it, you could find a creative way to make it work!” Joe looked at me like I was crazy and started reeling off a long list of what I like to call ‘I cant’s’…. All the reasons why doing something that hasn’t been done before ‘can’t’ be done.

Maybe you’ve had a similar experience personally or in the organization you work in. I see it happen all the time:
1. A customer calls with an unusual request and instead of coming up with a creative solution that solves their problem, your service rep gives them a long explanation about why they ‘can’t’ help: we don’t offer that service on this platform…our computer systems aren’t set up to do that…it’s not within my authority…to name just a few…
2. One of your supervisors asks a team member to complete a task they are unfamiliar with and instead of figuring out how they might accomplish it, the team member reels off all the reasons they ‘can’t’: not trained…don’t have the right software…don’t have time in my schedule…
3. You want to take up a new hobby – let’s say golf – but the list of excuses you give yourself about why you ‘can’t’ prevents you from even getting started: no time…don’t have the right equipment…too expensive..too far away…and instead of figuring out how to overcome these potential barriers, you simply give up the idea altogether…

Now, you might be thinking to yourself, what does ‘I can’t’ have to do with creativity? Creativity is a sudden inspiration that come out of nowhere! Its an instant flash of insight in which the solution to a problem ‘magically appears’ that other people have in the shower or wake up with in the middle with, isn’t it? It’s about big, new shiny things no one’s ever heard of before, right?

I don’t think so. In my opinion creativity is about figuring out how to solve those nagging, regular, run of the mill problems we run into every day. The ones that we so often tell ourselves – consciously or unconsciously – that we ‘can’t’ do anything about.

In my opinion and experience, all of us, as human beings, have to ability to be creative: that is to take knowledge and ideas that we have from previous experiences and synthesize them into ‘new’ ways of thinking about and doing things. We’re all innately creative. In order to tap into that creativity, though, we have to get rid of what I call the ‘I can’t habit’ – that voice in your head that generates the long list of reasons you ‘can’t’ find solutions to your problems or the problems your customers are having.

As we’ve all experienced, habits can be very hard to change. Especially those we’ve had for a long time. Oftentimes, we’ve had the ‘I can’t habit’ so long, we don’t even recognize we have it. It’s just become our default. So how can you work towards replacing an ‘I can’t ‘ habit with an ‘I can’ one?

Here’s my suggestion of how to start. As soon as you hear yourself – or one of your team members – start to list all the reasons something is not possible, STOP, and immediately:
1. Take a piece of paper and divide it in half (no piece of paper? How about the Notes function on your iPhone!)
2. Across the top of the paper, write down what you or your customer wants to happen: for example: add timekeeping to my account…have Z-folds for their tri-fold brochure…run a marathon…
3. On the left side of the paper, make a list of all the reasons your brain is telling you ‘I can’t’ – get them all out! Challenge yourself to write down as many as you can!
4. On the right side, write down at least two things you could do about each ‘I can’t’: to do that, think back to previous experiences that were similar that got solved – what did you do and how could that be applied to this situation? If you are stuck, ask a friend or family member for suggestions! It’s not cheating, it’s collaborating! Write down all ideas, no matter how crazy they might seem!!
5. Pick one thing from the right hand side ideas to start doing immediately! Once you’ve gotten rid of the associated ‘I can’t’, start working on another item.
6. Give yourself a reward for each ‘I can’t’ that you turn into an ‘I can’! You deserve it and the reward helps to reinforce the new habit!

Keep ‘practicing’ this way and soon you’ll find that you’ve replaced your ‘I can’t’ habit with a ‘let’s figure out how to do this’ habit – and that’s what creativity is all about!

Now I bet you’re wondering, what about Joe? Was he able to solve the problem his company was having? Well, the next week he gave me a call and told me how after some work, he had come up with a couple of different ways to pay drivers next day. None of them complicated or difficult – and all of them relying on experience and knowledge he had previously. “You know”, he said, “this will be a great differentiator for us. And all I had to do was really put my mind to figuring out ‘how’. It’s made me realize there’s always a way.”

So, next time you hear yourself, a team member or anyone else say, ‘that’s not possible…we can’t….” simply get out a piece of paper and help them learn to figure out how. Keep practicing and soon you’ll have the ‘creativity habit’ and so will they!

Do You Have the Creativity Habit? June 22nd, 2016karynross